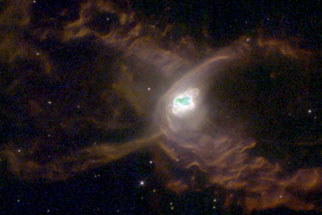 This theory, is maybe one of the most interesting theories about our universe ever. This "Big Bang" is a theory that a giant massed star had exploded and send everything into super nova. When this happened, Nebulas were formed. A nebula is an area where stars are created. When this giant star exploded, all galaxies were blasted away form each other. You may be wondering, well how do we have evidence for this? Well I have a couple things I could share with you to make you a believer.
One major piece of evidence is that all galaxies are moving away at major amounts of speed that can vary. This indicates that all of the galaxies had to be together at once, but then a huge force pushed them away. This also leads to the next piece of evidence.
Telescopes with the ability to measure radiation in space detect residual radiation throughout space, which indicates that something massive occurred. This backs up the first statement by showing obviously something big caused this radiation to still be present in our universe, and this "big" thing that happened could have been a star explosion! This all ties together and makes a great argument about how our universe was a long time ago, and how it could be in the future.
Powered by